Guest: Jon Solomon has been playing and promoting top-notch indie music for years on the mighty WPRB. He can be heard every Wednesday night from 7:00 – 10:00 pm ET. Listen at wprb.com!

Audio Note: We used a new audio rig and had a little sound problem, you might need to pump up the volume a bit. Sorry!

Playlist: “Drawn Down the Moon” by Edsel,  “Under Heavy Manners” by Dissociates

Giveaway: Thanks to our friends at Quirk Books for the super cool “Gig Posters Volume 2” book by Clay Hayes we gave away to a lucky audience member. 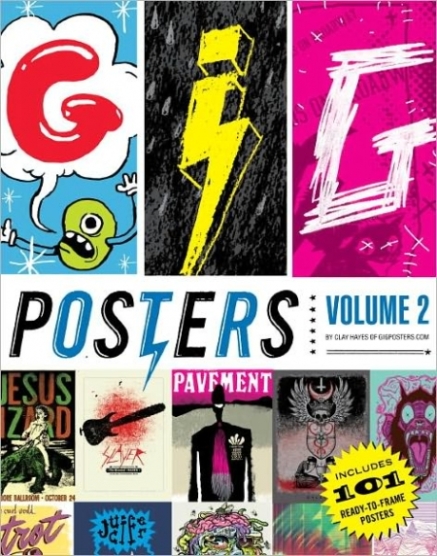 Preview: “Have you ever been in a fight with another radio guy?” and “I like radio… and basketball… and watching Dr. Who.”

Team UsedWigs, Inc. pulled off our first “live” show this past Friday night and it was a ton o’ fun. Critics raved, “They sure drink a lot, especially in a coffee house.” and “The seats were very comfortable.”

Russ, Todd and I have been doing our podcast for over four years and thought it would be a grand idea to get the hell out of Russ’s home studio for once and enjoy some humanity, interactivity and the deafening thunder of applause and fanatical adulation (we got 2 out of 3, not bad).

We chose MilkBoy Coffee in Ardmore as the venue because Russ and Todd have performed there many times (think Cirque du Soleil on a larger scale) and the owners Jamie and Tommy are great guys who are always up for something different, like a live podcast.

We had a little over a month to organize the show, which was pretty tight considering all we wanted to do: live musical performance, comedian, special guest interview, live science demonstration and some multimedia presentations all jammed packed in a 2-hour show. We envisioned an old-school Mike Douglas Show vibe. After the 3 of us conferred at a kick0ff meeting (McMenamin’s Tavern), we decided we needed some serious help. So we brought in some pros… the After School Specialists.

We enlisted the human firecracker, Kenjamin Franklin Ryzner, to create and serve up the multimedia and Machiavellian martinet, Jandek Phil Charron, to direct the whole shebang (neither asked for money up front, just a piece of the international distribution rights of the DVD and the Spanish language version). Our lovely announcer Lisa signed on too (lucky for us, Lisa and Russ are married, so she could not fib and say she was busy).

That’s a pretty solid crew to stage a performance, but every good talk show needs a house band, so Russ got on the horn and “Rusty Static and The Wig Tones” were born. Part of putting a show together is getting your talented friends involved, and lucky for us, Russell Gellman and Brian Jacobs are two of best musicians and nicest guys around (and are usually up for partaking in our nonsense).

There were rumors  SM Shrake was going to be in town and join the show too… his legions of fans were lighting up the message boards and fan sites.

So we got the team together and then assembled a stellar line-up of super fun guests:

Another excuse to drink planning meeting took place (Earth Bread + Brewer) and we nailed down each show segment to specific time and doled out the duties. Everything went along swimmingly until the day before the show when the schedule band Audible (new CD is outstanding!) had to pull out due to a medical emergency. Uh oh! We’re screwed. “Can anyone do magic tricks for 25 minutes?”

I mentioned earlier about getting friends to help out, yeah, well this is one of those times when you find out just what great friends you have. I’ve been a huge fan and friends with the Philly band The Grundles for many years, so I contacted Tom Jadico (bass and surfboard) about our dilemma and he quickly got on the Grundle Hotline. Less than two hours later, Grundles Ted, Andrew and Tommy agreed to play the show. How cool is that? Very very cool, indeed. Fonzie-freaking cool.

It’s 7:00pm on June 12 and a growing crowd at Milkboy assembles while Kenjamin Franklin’s dynamic video presentation of magic, spandex and teen drinking explodes on screen. Everyone’s in a fine mood. Beers are cracked. Lattes are sipped. Cheeks are kissed. Then 8:15pm hits! Director Charron barks out orders, Ken fires up the video introduction, Lisa takes the stage for the announcing duties, The Wig Tones grab their instruments, and after 40 glasses of water (just a little dry mouth) me and the boys take the stage. Shenanigans, awkward pauses and paper shuffling ensue!

It went pretty darn well from then on. We popped some beers, chatted a bit, gave away a UsedWigs Live Swag Bag to a lucky audience member and then treated the crowd to a PowerPoint presentation on Facebook detailing “how old people (like us) have ruined it!”

At the beginning of this segment we were surprised by a cleverly-disguised SM Shrake playing maracas and wearing a creepy wig. Shrake, a Facebook etiquette expert, sat down and joined the lively discussion. Segment ended, a new one began.

Bestselling author Josh Piven then joined us on stage for an amusing chat about his “Worst-Case Scenario Survival Handbook” series and his upcoming book “This Green House” (September 2009). Josh was a funny guy and thankfully, tolerated his hosts who peppered him with barrage of hard-hitting questions. As Josh left the stage, Lisa presented him (and all our guests) with a UsedWigs Live “Home Version” game:

Next up, our pal Michele Melcher gave away one of her lovely illustrations to another lucky audience member while the band set up. The high-energy and charismatic Grundles rocked out as expected. They chatted with us for a bit before leaving to “wing on over to London and jam with the Stones!”

While the rocking may have ended, the rolling continued in fine fashion when comedian Don Weir made a triumphant return to his homeland from Brooklyn, NY. Don killed! 911 received numerous calls immediately after his set about severely strained laughing muscles.

Throughout the night Todd was busy drawing the guests on his trusty pad and displaying the art on a little easel for all to enjoy. The guest was then given his personalized piece of art to take home. Pretty sweet, huh? You would pay damn good money on the Wildwood boardwalk for that honor, but at UW Live… absolutely free! Rusty Static and The Wig Tones kept everything moving and grooving during the show too, creating a chill vibe to temper some of the between segment nuttiness.

UsedWigs Live inaugural show sadly had to end (a senior citizen puppet show was scheduled for 11:00pm sharp), but not before Crazy Aaron pounced on stage and administered some serious pickle electrocutions (not a euphemism) with some old-timey contraption, dazzling and endangering the excited audience who were clamoring for more pickled-fried goodness. It was a sizzling good ending to a fun-filled night.

Many thanks to the above-mentioned UsedWigs Team members; the wonderful guests; the awesome staff at Milkboy who were insanely accommodating; the many fine folks who helped us promote that crap out of the show (Chris and McG at PhillyBurbs.com, Eric at Geekadelphia.com, Dave at ComicVsAudience.com and Jon Solomon of WPRB); photographer extraordinaire Lindsay McIntire, artist Bevan McShea; Aaron and Elizabeth at PuttyWorld; wives Heather and Kelly; and of course, all you good people who came out and showed us a lot of love. As Hammer would say, “Proper!”

Oh, and many thanks to McCloskey’s Bar (next to Milkboy) for the after party! My booming hangover was well worth it.